In the pre-race meeting, they kept saying you'll really have to "dig deep" to pull this off.  Well, they were right.  The 25th Annual Leadville Trail 100 MTB was nothing short of the most epic day I have ever experienced on a bicycle.   But there was a lot more to it than one day on the bike.  I've been "training" since November of 2017 on gravel roads around FATS, doing hill repeats, running, core work, whatever my good friend/coach told me to do.  Originally, this was all for Southern Cross, a pretty darn tough, 55 mile gravel road race in Dahlonega, GA in March.  About 2 months out, a seemingly epic event, was suddenly a stepping stone for something of much more grandiose proportions.  On January 14, 2018 I got a confirmation email that I had gotten into the LT100 MTB through the lottery system.  When I first saw this I thought it was a joke, as people rarely get in the first time they apply.  If you know my coach and good friend, Chad Kimbrell, you probably know how good he is at practical jokes.  I remember looking at the email repeatedly trying to figure out how he could have concocted this document as there was no information on the LT100 site yet.  On top of that, the whole thing was sort of a joke from the beginning.  A group of us were having dinner after the shop's New Year's Eve Cruise and he said, "I'm going to put you in the LT100 lottery. The deadline is tonight."  I said, "whatever, it won't matter 'cause I never win lotteries and no one gets in the first time."  On top of that, I figured if I did get in I could just give up my lottery spot to someone else if I didn't think I could pull it off.  Well, I wasn't privy to all the details.  I was put in the lottery along with Chad and his wife Candace (group/team entries improve your chances apparently) and if you get in, your in.  There is no cancellation policy and no transfers.  Things just got real, real.

Once I got through Southern Cross, I took a couple of weeks off, and Chad started working on a training plan.  I remember thinking, how am I going to have time for this?  How am I going to keep up with things outside of work?  We're entering the busiest time of year at the shop, I've got the Lock to Lock coming up, then the Canal Crown series, when will I be able to train for a race in August?  With an event of this magnitude you have to put in the work or things won't go well.  It was very stressful and at times, I felt like I was burning the candle at both ends, but somehow I was making it happen.  Fortunately, I have a great group of guys at the shop and an amazing wife that filled in all the gaps for me.  The hardest part of all the training was the long ride days on Sunday as this is the only day Kim and I have off of work together.  I was getting up before daylight, going out for several hours on my bike, and coming back worthless.  This is when I started to understand just how much families and friends sacrifice for people during their training. 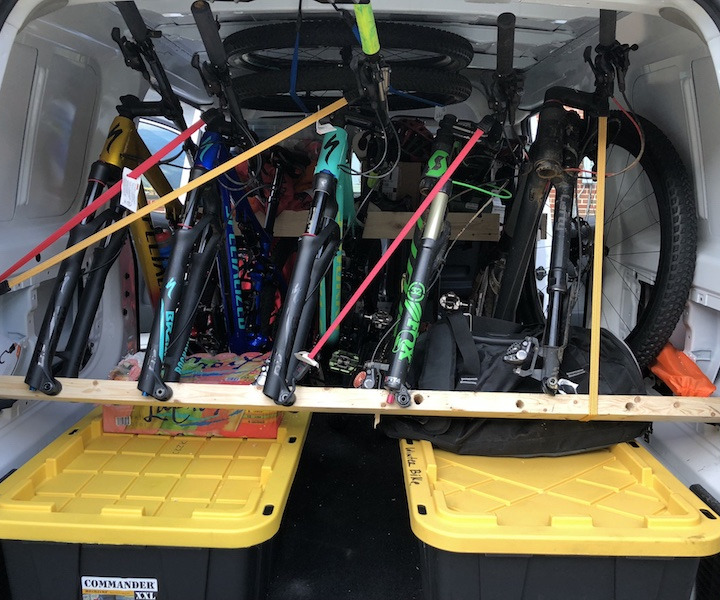 Throughout the training cycle, it seemed like the event was so far away...then July hit.  Time suddenly went into ludicrous speed.  Next thing I knew, Chad was picking up everyone's bikes and driving them to Colorado.  Yes, Chad was not only participating in LT100, he was coaching me, setting up a rental van and transporting bikes.  Yeah, he's kind of a good dude.  Even though I knew all the equipment was in good hands, I've never been so nervous about my bike being driven anywhere.  All part of race week nerves I guess.  Fortunately the only thing I had to deal with was a little air in the brake lines due to the elevation.  This was not stressful at all.  I mean who needs brakes to ride bikes in the Rocky Mountains anyway.  It's a race, why would I need to slow down.  This was any easy fix for The Meticulous Mechanic aka Brian Bluemle who, accompanied by his lovely wife Nichole, made the trip over from Cortez, CO.  Best of all this was being done about 10 hours before the race started.  No worries! 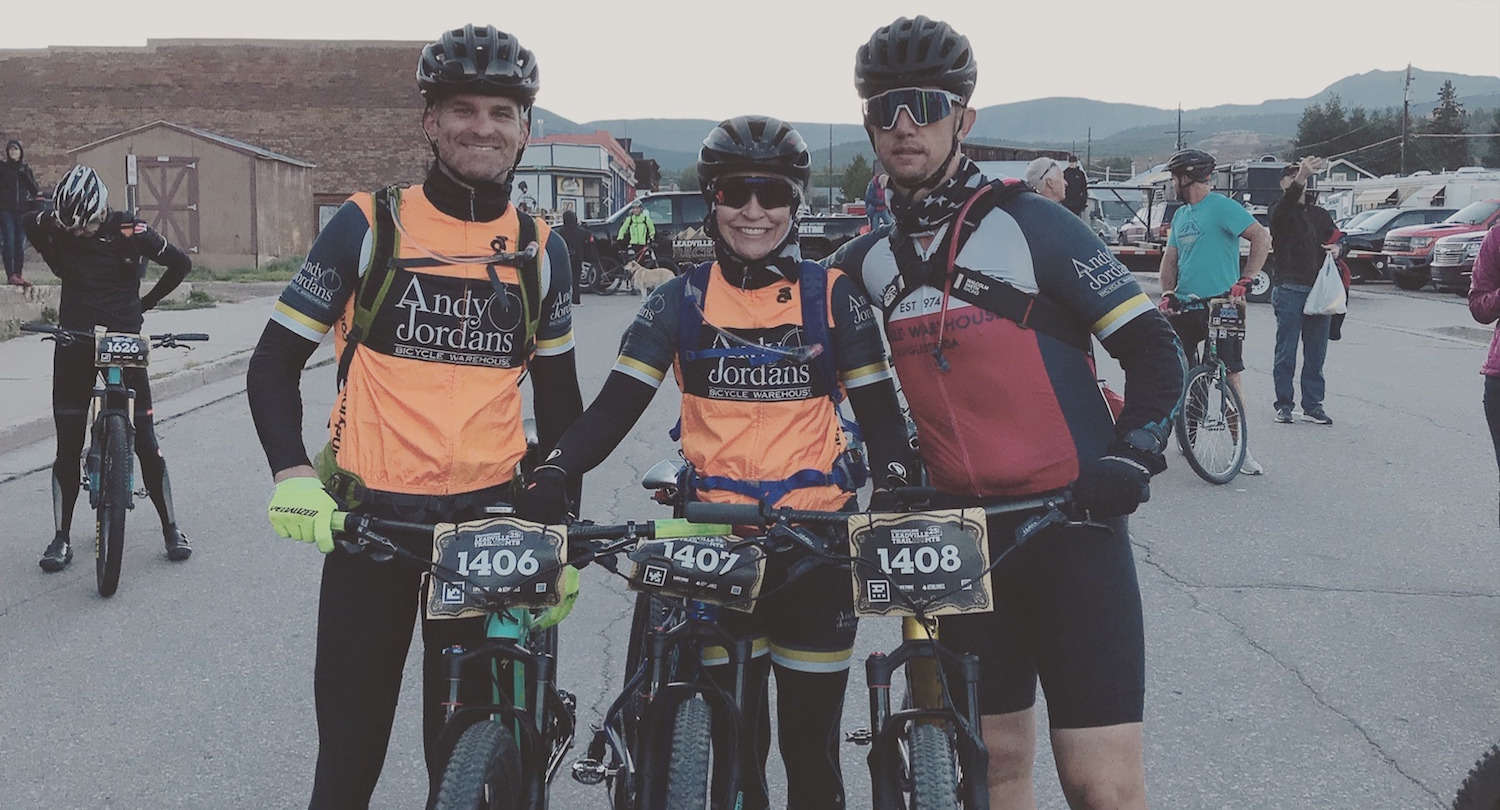 After yet another sleepless night (did I mention it's hard to sleep when you're two miles above sea level and wake up gasping for air every few hours?) it was race morning.  The race starts at 6:30am which means we needed to be fueling for the day by 4:30am.  Miraculously, we were all on schedule to start force feeding ourselves breakfast.  Well, we thought we were on schedule.  Once we got into downtown Leadville, got the bikes unloaded, layers on, last minute bathroom breaks taken care of, pre-race photos taken, and into our assigned corral, we were pretty much in the very back of the pack.  No problem right?  I quickly learned about the Leadville bottleneck.  After passing a few people through town, the course then turns on to a dirt road and this is where everything comes to a halt.  At one point we were going so slow on flat ground, it was hard to keep the bike upright.  I guess this is to be expected when 1500 people are funneled into a tight area.  Once at the top of the first climb, things started to spread out and you could settle in for a while. 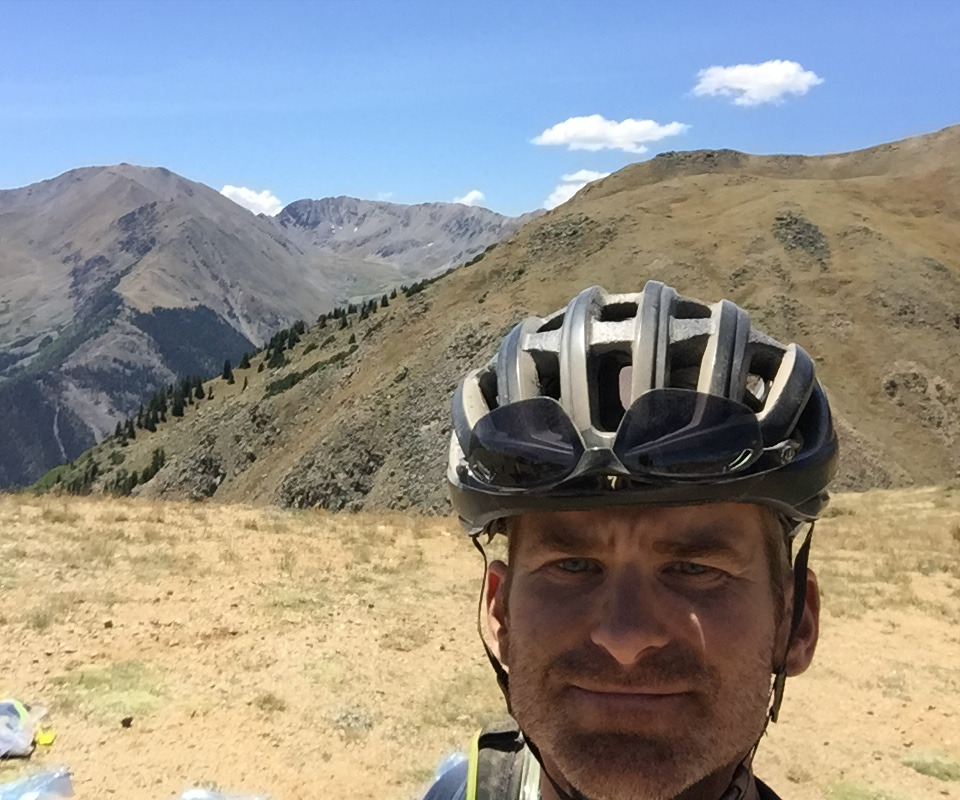 Next thing you know, you're in midst of the world famous Columbine Climb.  Then the next thing you know you feel like you're bonking at mile 45.  Not a good feeling.  I remember trying to shift gears, but I couldn't get my hand to work.  Then my legs suddenly felt like they were going to lock up.  How could this be happening?  My nutrition was on point, hydration was dialed, and my level of effort was very conservative up to this point.  I've trained way too hard to be feeling like this not even halfway in!  Then I remembered a podcast Chad and Candace had me listen to on the way to NC for a training ride.  I recalled the host mentioning a "fake bonk" that some people experience when riding at high elevation, and that you just have to dial things back and push through.  I proceeded to stop for a minute, eat something, get my head back in the game, and get back on the bike.  Back in the groove...but not long.  Here comes the Columbine Goat Trail Death March.  This is the fun part where you get to push your bike up to 12,500ft, into the clouds.  It's about a 2 mile stretch that never seems to let up, and apparently they re-routed the race course this year due to some land owners giving us the priviledge of pushing bikes a little more.  You look up the mountain thinking the end is near and it just looks like little ants walking up the peaks.  So you just put one foot in front of the other and eventually you're at the top.  Take a quick selfie, grab some food, and rip back down to a lower elevation where your brain and body functions a little better.

I was able to make up some ground coming back down the mountain and was starting to feel better too.  Got to see Kim, Brian, Brian, and Nichole at the Twin Lakes aid station and was off to the races.  There's nothing like seeing some familiar faces to get you going, because from this point on, the course is constantly working it's way up.  It seemed like every section was uphill, a false flat, or a false flat with a headwind.  And it was getting hot!  Being that close to the sun makes things a little more intense.  I was grabbing waters to pour on my body, but it was short lived relief as things dry up quick in Colorado.  Nonetheless, I'll take it over humidity any day!  But I won't take over humidity, is pushing my bike uphill more.  It was way more fun coming down Powerline on the way out.  At this point, you're about 78 miles in, feeling pretty beat up, and it's time to start pushing up.  I rode as much as I could, but eventually you just have to get off and walk.  People were starting to crumble like stale cookies, myself included, on this stretch.  I was getting into a dark spot again, then I heard this girl yelling at everyone from the top of the climb.  She was screaming "most people will never do what you're doing in their lifetime", "you are a beast", "you will finish".  Just what I needed to hear at that very moment to get my head back in the game.  Have I mentioned how mental this thing is yet?

Finally the miles are going by faster.  Maybe it's because the end was near, or maybe it's because I couldn't see my mileage as my Garmin went into battery save mode.  On the last flat section before the climb to downtown Leadville I came across Dan Arnette, he was working towards a Lead Man finish (google it).  We did some quick math and figured out we could finish under 11 hours.  We worked together, passed lots of people, and made up some more ground as we approached the finish. 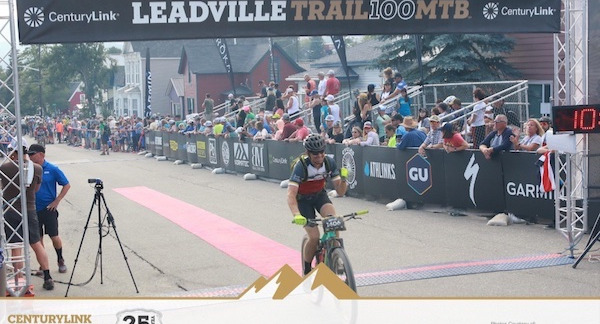 The finish.  This is the reward...and the silver belt buckle.  All the training, all the sacrifice, all the pain, for this moment.  You could hear the crowd screaming ahead as riders crossed the line.  People were lining the streets cheering us on as we came up the last hill.  You crest the hill and you're now able to see it.  Emotions are running wild as it's been a roller coaster of a day both mentally and physically.  You did it.  As you roll in, the crowd is giving high fives, screaming at the top of their lungs, and then you hear the announcer say your name as you come up the red carpet and cross the finish line.  I saw Kim, she put my finisher's medal on me, we hugged, and then I broke down.  It's hard to put the emotions into words, but If I had to sum it up, I'd say it's accomplishment.  You set a goal, you work towards that goal, and when you reach that goal it's an overwhelming sense of accomplishment.  103 miles raced across the sky in the Colorado Rocky Mountains.  Now it's your turn! 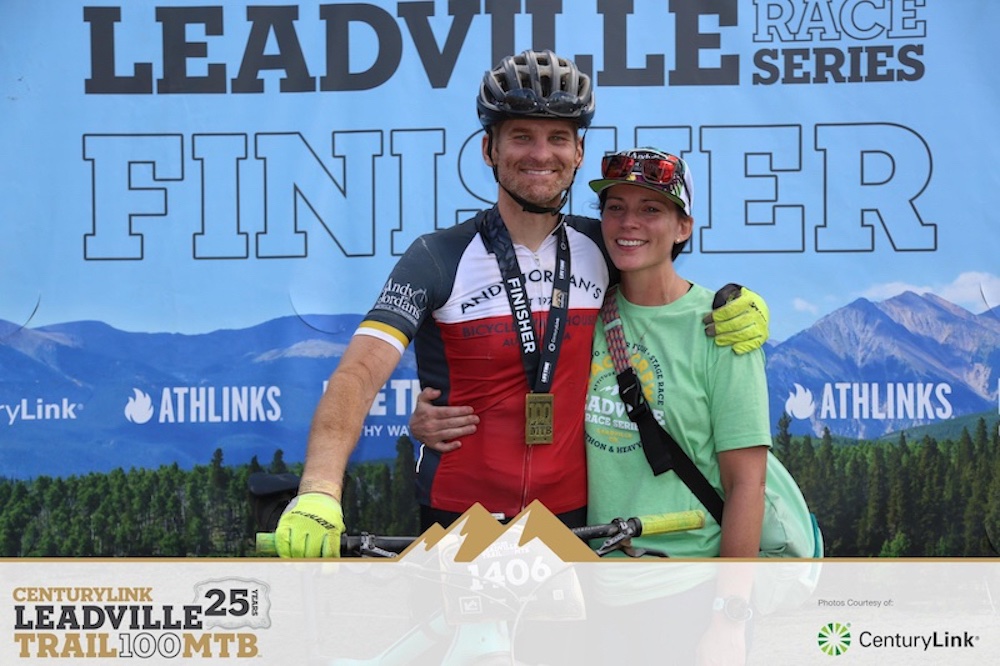 Getting to LT100 is epic and it takes a lot of support from those around you.  That said, I can not conclude without thanking a few people that helped get me across that line.  The Bluemle's, Candace Kimbrell, Brian Patterson, Wayne Garner, Ed Farnell, Steve Whitcomb, Dustin White, Ben Hyler, Matt Newell, Brian Sheedy, Dan Arnette, Wade Peyton, The Lesko's, the AJBW Crew, all the LT100 volunteers, and everyone for the words of encouragement along the way.
A special thanks to my mom and dad for passing down the mental fortitude to get this thing done, my coach Chad Kimbrell for getting my body ready for the most physically demanding day ever, and my wife Kim for the unwavering support throughout this entire journey.